I know what you are thinking, how could this be a “new” New Toy Robot when there wasn’t even an old one? Well, the simple answer, there was.

Let me explain. A long time ago… in the year 2009… there was a web comic called, “Chuck and His New Toy Robot,” which I created. 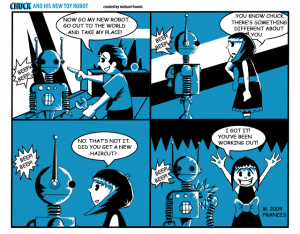 It was about a boy named Chuck who created a robot to sort of replace himself to avoid any type of human interaction. All Chuck wanted to do was work and be left alone. The catch was that everyone thought the robot was Chuck. Even though the robot didn’t look at all like him, people still talked to the robot as if it was Chuck. The robot communicated through a series of beeps and whistles and people still had conversations with it!  Chuck’s perfect plan was working. So New Toy Robot was born as a vehicle for my new comic, but it didn’t last long. 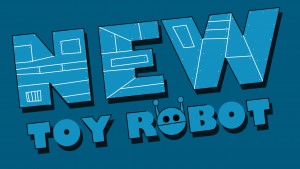 For me “Chuck and His New Toy Robot” was suppose to be a funny, silly comic full of wackiness and slapstick, but I came to realize that it was actually sad and depressing. Here was a boy who wanted to work and be left alone while his friends played with the robot, but the robot completely replaced him and his friends didn’t even notice. Everyone he cared about saw him as a soulless “tin can” to talk at, not to talk with. Not at all what I intended. End of comic. End of New Toy Robot.

I loved my robot and I loved New Toy Robot, so for years I tried to figure out how to make this work. That brings us to 2018.

I wanted a place where I can share my passion for comics, collecting and film through cartoons and humor, but also with a focus on world politics and events. Believe it or not, politics and world events helped and continues to shape science fiction and fantasy. Did you know that in 1968, the TV SHOW Star Trek had the first mixed-race kissing on U.S. TV with an episode in which Captain Kirk kissed Lieutenant Uhura? Or that the basis of the graphic novel/film, V For Vendetta  is about a man hell-bent on bringing down a fascist state and convince the people to abandon the corrupt democracy? Sound familiar? Or the fact that Superman is an intergalactic immigrant forced to earth by a dying society only to become his new planet’s greatest protector? All relevant, all born from world events.

So, this is New Toy Robot. Taking on humanity with the help of a cute little robot named NTR. Fandom and politics for all! 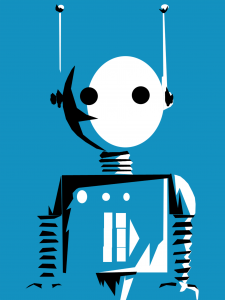 Born in Los Angeles. Left on the doorstep of a Jew and a Christian. Still confused.

No comments yet Categories: Uncategorized
New Episode of “People of Earth!” →

NTR’s Hauntings and Tragedies channel hit 100 subscribers today! Stay tuned for a special giveaway as a thank you! If you haven’t already, click the link in the Bio and subscribe!#truecrime #unsolvedmysteries #hollywood #silentfilm #streaming #youtube #williamdesmondtaylor

No plans for New Years Eve this year? Subscribe to NTR’s Hauntings and Tragedies on YouTube and catch up on all our current episodes! The haunted Whaley House, the Titanic, and the shocking murder of William Desmond Taylor are all available! #truecrime #ghosts #unsolvedmysteries

We can’t wait to show everyone what we have to offer for 2023!

Today, one of our episodes of NTR’s Hauntings and Tragedies hit 2k views! The channel itself has over 530 hours watched! Thank you everyone for checking out our show and if you haven’t already, click the link in the Bio and Subscribe! #truecrime #hollywood #unsolvedmysteries

Prepare yourself for the Strange Life of Mary Miles Minter. If you haven’t already, click the link in the Bio and subscribe to NTR’s Hauntings and Tragedies. #truecrime #unsolvedmysteries #hollywood #silentfilm #streaming #williamdesmondtaylor #mabelnormand #marymilesminter

Happy holidays from the team at NTR’s Hauntings and Tragedies! Thank you for all your continued support and stay tuned for more episodes! #truecrime #unsolvedmysteries #hauntings